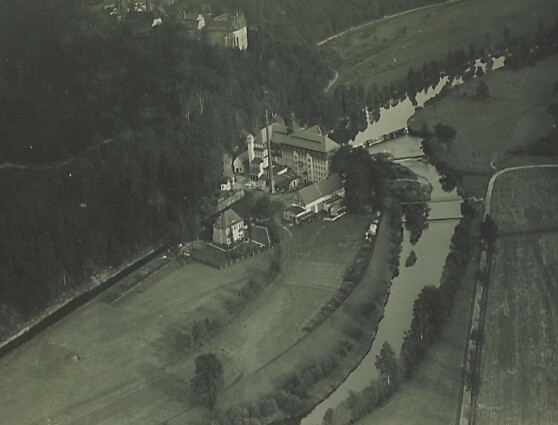 Information for all competition participants:

The site inspection and the colloquium will take place on Tuesday, 01.09.2020 in Sachsenburg:

The participation is optional. Please observe the applicable Corona protection rules of the Free State of Saxony.

Questions will be answered in block on this platform until 14.09.2020. 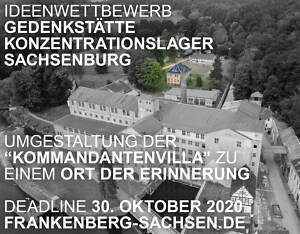 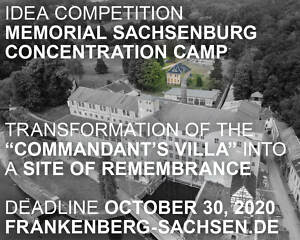 The town of Frankenberg in Saxony extends an invitation to tender for an international ideas competition for architects and artists as well as interdisciplinary teams with experience in holistic or memorial exhibition design – or interdisciplinary designer and project teams – with the goal of preserving the architectural remains of the ‘Commandant’s Mansion’ of the former Sachsenburg concentration camp in a way that ensures the best-possible quantitative and qualitative outcome, remodelling it as part of the Sachsenburg Memorial Site.

The National Socialists (NS) converted the plant facilities of a former spinning mill in Sachsenburg into a 'preventive detention' establishment in 1933, developing it into a concentration camp that was in operation until 1937. The early Sachsenburg concentration camp is paradigmatic for NS terror, demonstrating as it does the characteristic traits of the continuous elaboration of a system that was later carried to the ultimate extreme of the atrocities and inhumanity of the systems on which the large extermination camps operated. About 10,000 prisoners were interned at Sachsenburg concentration camp over the entire period from 1933 to 1937.

The ensemble of buildings was again used as a manufacturing site from 1937 to 1990 and is largely intact for this reason.

The existing memorial site is to be extensively developed. The content of the concept should address, first and foremost, the prisoners, their suffering and deaths as well as their experiences in surviving NS terror. A highly authentic memorial site is to be created, making, at the original location, the lives of the victims and perpetrators palpably real for the visitors to the site.

Nearly all of the architecture at the site has survived. The old mansion of the factory owner is one of the several buildings making up the ensemble. From 1933 to 1937 it was a keystone of NS power and hence represents a concrete site for perpetrators of NS crimes as the ‘Commandant’s Mansion’. The mansion still exists, but it is in such a poor state that assessments claim it can only be partially preserved in keeping with the requirements for the protection of listed buildings. A further complication is its location on a flood plain.

The aim of the competition is the presentation of ideas and conceptions that underpin permanently saving the architectural remains of the mansion as an important part of the memorial to be built.

Because only sections of the architectural remains can be rescued, artistic and special architectonic/landscape architectonic reshaping are expected that highlight awareness of the historical building and the immediate grounds. The assumption is that the mansion can be partially preserved. A total overhaul of the mansion is out of the question because of the ruinous state of the building structure and materials as well as the statics of the building.

For a building-code compliant redesign, all materials and techniques are allowed that are lasting at this site under outdoor conditions and that do not need permanent maintenance. Proposals may include roof protection either partially or completely if the like fits in with the overall concept, but this is not a requirement.

The awarding authority is especially looking for fitting solutions that maintain the recognizability of the building while appropriately and effectively melding the redesign of the ‘Commandant’s Mansion’ with the overall memorial site context, ensuring that it can be used long-term as part of the exhibition grounds in a large open space. The proposal must be approvable within the framework of §63 of Saxony’s building code. In particular the demands of listed buildings and flood protection must be attended to.

Fundamental demands of the ideas competition are, besides the construction of an accessible plateau, the preservation of the viewing axes and views toward the concentration camp grounds as well as investigating options of how best to attend to the historical remains of the villa, potentially from the angle of guided tours for visitors. There will be sufficient space for exhibition and seminar rooms in other buildings.

The competition foresees awarding a prize to one or several ideas and implementing them together with the authors in the coming years.

This measure will be financed by the Stiftung Sächsische Gedenkstätten from tax revenues on the basis of the budget adopted by the members of the Saxon State Parliament.